What You Need to Know About Inflation and Real Estate

What You Need to Know About Inflation and Real Estate

In recent years, it’s likely you’ve heard the media, your colleagues and even politicians speak about “inflation.”

You also may have noticed prices for regular everyday items including food, gas, or larger purchases such as homes, furniture and vehicles have risen sharply since the start of the COVID-19 pandemic.

Up until a few months ago, when government officials and the media spoke about the current rise in inflation, they often defined it as “transitory”. Now, officials at the Bank of Canada are stating inflation may actually be more persistent, and have signaled the future path for Canadian interest rates may be a series of rate hikes to help bring inflation back down to within its target range of 1% to 3%.  In fact, last month, the Bank of Canada announced that they would raise the policy rate from an all-time low of 0.25% to 0.5% and they are considering an end to their Quantitative Easing program.

Before we get ahead of ourselves, I think it’s important we take a step back and understand what inflation is and how it can impact our daily lives.

Inflation is a persistent rise in the average price of goods and services over time—or the increase in the cost of living. It can also be looked at as a reduction in the purchasing power of your money; as the prices of goods and services rise, your money can afford less. Therefore, the level of inflation has a major effect on the overall Canadian economy.

Part of the Bank of Canada’s mandate is to keep inflation low, stable, and predictable. The target aims to keep the total Consumer Price Index (CPI) inflation rate at the 2% midpoint of the target range of 1% to 3% over a medium-term horizon. The Bank raises or lowers the policy interest rate as it deems appropriate by either raising it to control inflation or cutting it to help encourage spending and borrowing in economy. This was seen at the beginning of the pandemic to help support the Canadian economy devastated by pandemic-related lockdowns and monetary policy continues to remain accommodative.

How do we track inflation levels?

There are a few ways to track and measure levels of inflation in the economy, one being the CPI which is produced by Statistics Canada.

The CPI is calculated by comparing the cost of a fixed basket of goods and services purchased by consumers over time. The CPI is a widely used by government agencies and private organizations as an indicator of the change in the general level of prices experienced by Canadian consumers. The goods and services in the CPI basket are divided into eight major components: food, shelter, household operations, clothing/footwear, transportation, health/personal services, recreation & education/reading, and finally, alcoholic beverages.

There are various measures of CPI that Statistics Canada produces, some include the price of more volatile costs such as energy and food which can be influenced by changes in weather patterns and other factors. When setting monetary policy, the Bank of Canada looks past these volatile and sometimes transitory moves in total CPI inflation and tries to focus on more “core” measures of inflation that may better reflect underlying trends in inflation. There are three core inflation measures the Bank focuses on: CPI-trim, CPI-median and CPI-common. 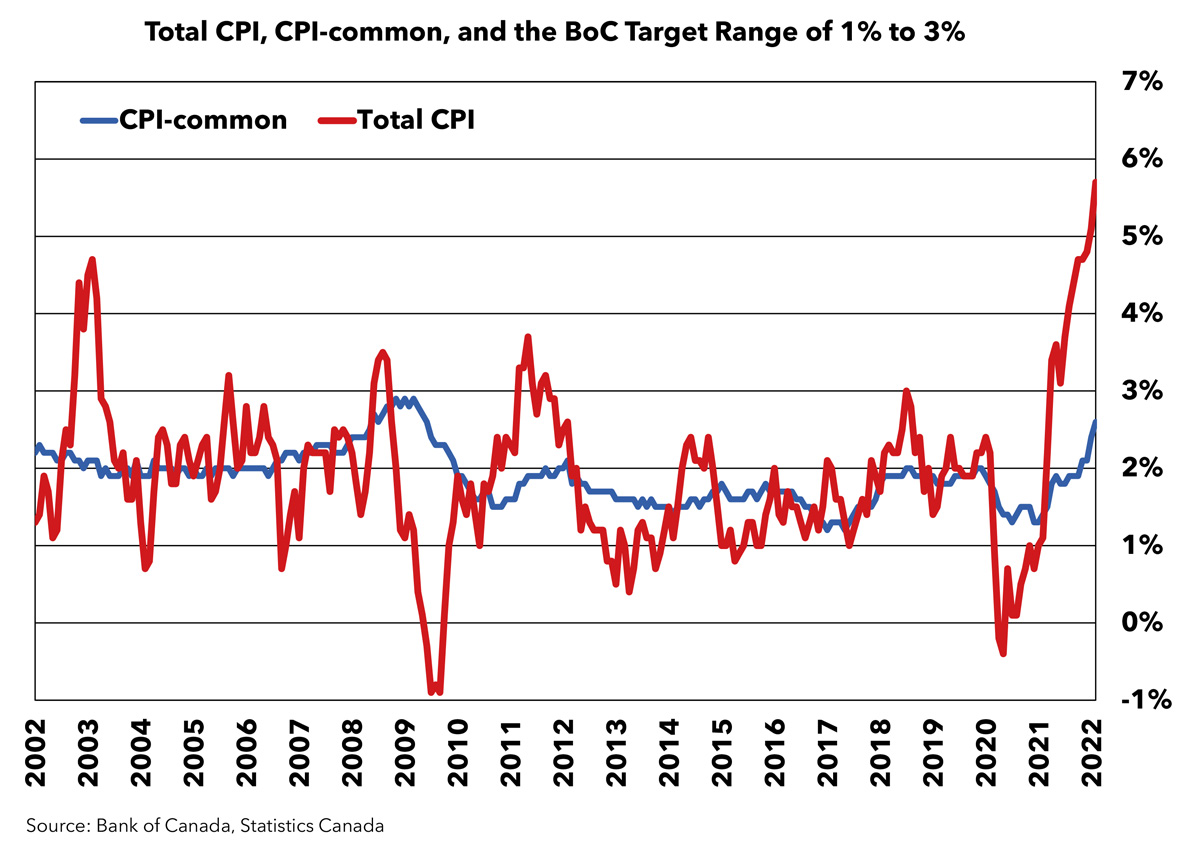 When looking at the chart, we can see Total CPI is well-above the target range for the Bank of Canada while the measure for CPI-common is within the target range but looks to be rising quick. Lingering supply-chain effects from the pandemic as well as rapidly growing/changing geopolitical tensions across the globe continue to drive inflation higher and could stay well above the Bank of Canada’s target rate for the foreseeable future. This has forced the bank to raise rates earlier than they were forecasting, and they are now forecasting the beginning of a period of “quantitative tightening” to try to bring inflation back closer to 2%.

In terms of how the Canadian housing market has matched up against inflation over time, I conducted an analysis to see how average home prices compared to overall consumer price inflation from 1971-2021.

First, I deflated the Canadian residential average price to remove the consumer price inflation amount, giving us the “real” average home price. This calculation is simply taking the Canadian annual average price and dividing it by the CPI number for that year. I then looked at the compound average annual rate of change in home prices broken out by decade over the last 50 years. Unfortunately, these decades do not all line up perfectly with housing booms/busts, but they do a decent job. There are probably many ways to present this data, but I think the chart below helps to capture both home prices and inflation for a reasonable time period going back with some historical differences, all just in six bars! So, what you’re looking at, is the real average price growth for Canadian real estate (that is, over and above inflation) compounded at an annual average rate for each decade since the 1970’s. 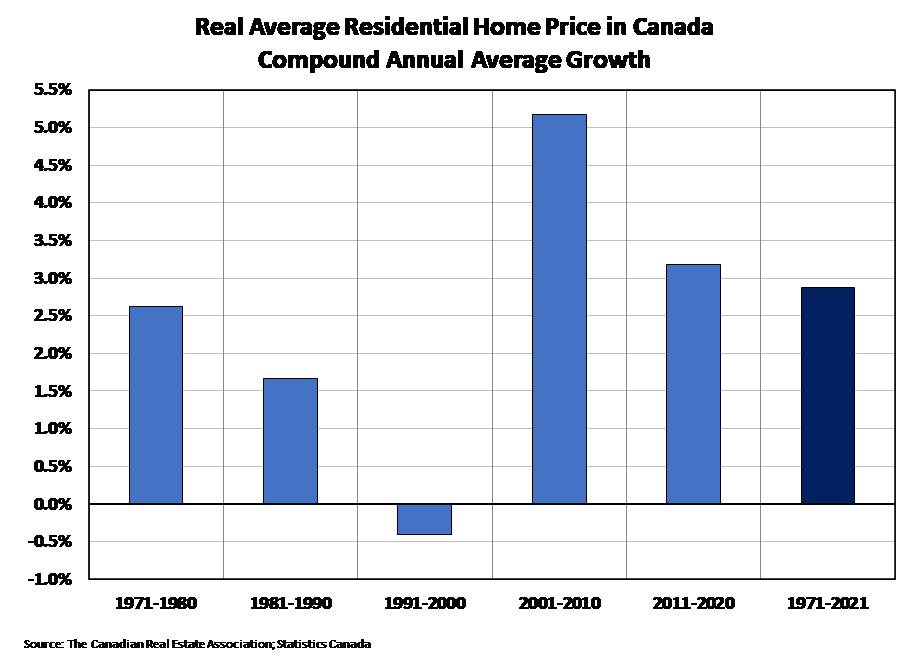 The chart above shows how the growth rate has differed over the past 50 years, with healthy levels of real growth in the 1970s when inflation was high. There was decent growth in the 1980s owing to the housing boom in the second half of that decade and negative real price growth in the 1990s, when home prices were basically flat. The highest amount of growth in the 2000s when the market boomed, up until 2007. And finally, another period of strong growth in the 2010s, all backloaded in the years 2016-2020, with 2020 being the second largest year for price growth on record (after 2021).

Throughout the last 50 years, the overall real growth rate over time has been in the 2.5% to 3% range, showing that over time, real estate has generally been a safe long-term and reliable hedge against inflation. One caveat worth mentioning, is that because inflation has been relatively subdued over the last few decades, we haven’t had much inflation scares in which our central bank had to react strongly to. If the current rate of inflation were to persist above the Bank of Canada’s target range going forward, the upcoming rate tightening cycle which would be needed to control that inflation could seriously slow down the housing market from its currently elevated levels.

There are many reasons why home prices would grow faster than inflation over time outside of those cyclical ups and downs. Canadian housing markets are influenced by a multitude of factors, including population growth, demographic factors, employment growth, the rate of new housing being built, the type of new housing that is being built, speculation, zoning, density, physical/natural constraints—the list goes on.

This article was taken from the CREA website at https://www.creacafe.ca/what-you-need-to-know-about-inflation-and-real-estate/  Keep up to date on the latest interest rate changes, consumer confidence and more on CREAStats.ca.

The article above is for information purposes and is not legal or financial advice or a substitute for legal counsel. 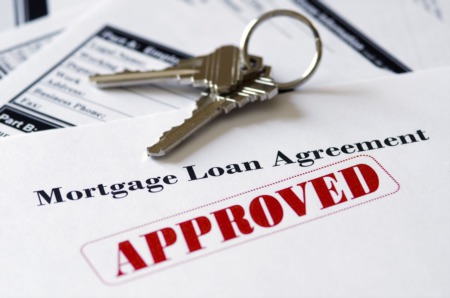 The Mortgage Process & How It Goes

The mortgage approval process in Alberta generally involves the following steps: Pre-approval: Before you start looking for a home, it's a good idea ...Read More 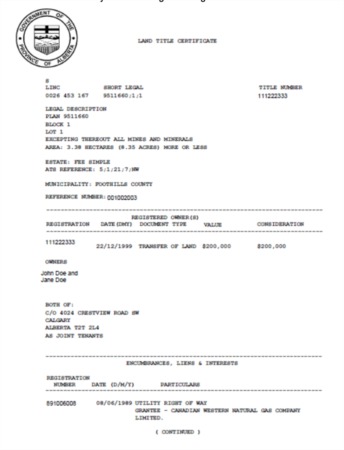 What is Alberta Land Titles and Why Is It Important?

In Alberta, the land titles system is a way of registering and keeping track of who owns a particular piece of land or property. The system is ...Read More